Angular vs React in 2022: Which is Better and Why?

When it comes to developing a new project, an important question arises for developers and start-up owners: which is better to choose: Angular or React? These two popular tools for front-end building have been competing with each other for several years, and each has significant development advantages, so it seems difficult at first glance to give a one-word answer. This article will help anyone looking for truth to figure out which framework to choose to correspond fully to the goals of the project.

Angular version 2.0 and higher is an open-source framework for creating a dynamic frontend for scalable projects. It was developed in 2009 by Miško Hevery and Adam Abrons at Brat Tech LLC as a software to facilitate the development of enterprise applications. The first open-source release of Angular was in 2010. Later, Abrons left the project, but Hevery continued to work on it while at Google.

In 2014, the development of Angular 2.0 began, and the new version was supposed to be very different from the previous one. Angular 2.0 was built entirely in TypeScript (a programming language that extends the capabilities of JavaScript). The official release took place on September 15, 2016, and since that time, the framework has been fully supported by Google. The first version of Angular continues to develop separately and is known as Angular.js. The most recent version of the frontend framework is Angular 9, which was released in February 2020.

The Good and the Bad of Angular Development

Let's briefly look at the advantages and disadvantages of Angular. 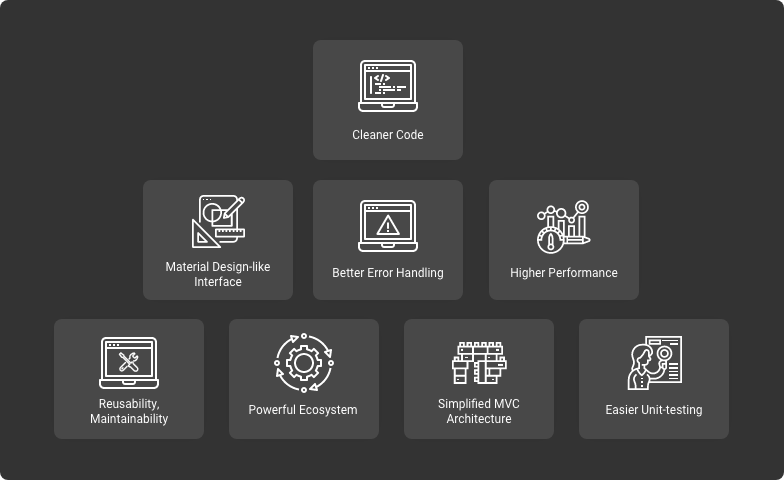 Hire experienced Angular developers from KeyUA who have been using this framework for about 10 years to implement scalable and high-performance web applications.

React (also used React.js) is an open-source JavaScript library for user interface development. It was founded by Jordan Walke from Facebook in 2011 as one of the news feed tools. In 2012, React was used for the front-end part of Instagram. The first open release of React took place in May 2013, and since that time, it has become available to a wide range of developers. React also allows programmers to produce native iOS and Android applications, due to the fact that in 2015 Facebook released React Native.

The Good and the Bad of React Development

Now let's look at the main reasons why, from year to year, React takes first place in the list of popular tools for front-end development. 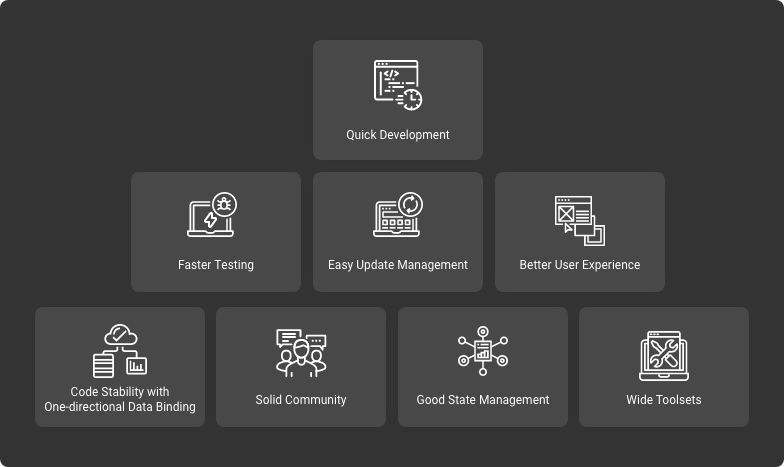 Despite all its strengths, this JavaScript library has some drawbacks.

Not sure which tool is best for your enterprise? Contact our specialists, and we will help you evaluate your project and choose the most suitable technology stack.

To objectively assess the advantage of these two popular technologies for creating user interfaces, we will conduct a comparative analysis of the most important aspects of application development and execution.

In terms of performance comparison, it should be noted that both tools do a great job of creating dynamic and responsive products. React uses a virtual DOM, while Angular runs with a real DOM. And here's how it works: when the data changes, the real DOM changes the entire HTML branch instead of updating only the needed bit information. In the case of a virtual DOM, changes occur without affecting the entire structure of the HTML. Simply put, a virtual DOM contributes to the high performance of the application, regardless of its size, and speeds up implementing the necessary changes. 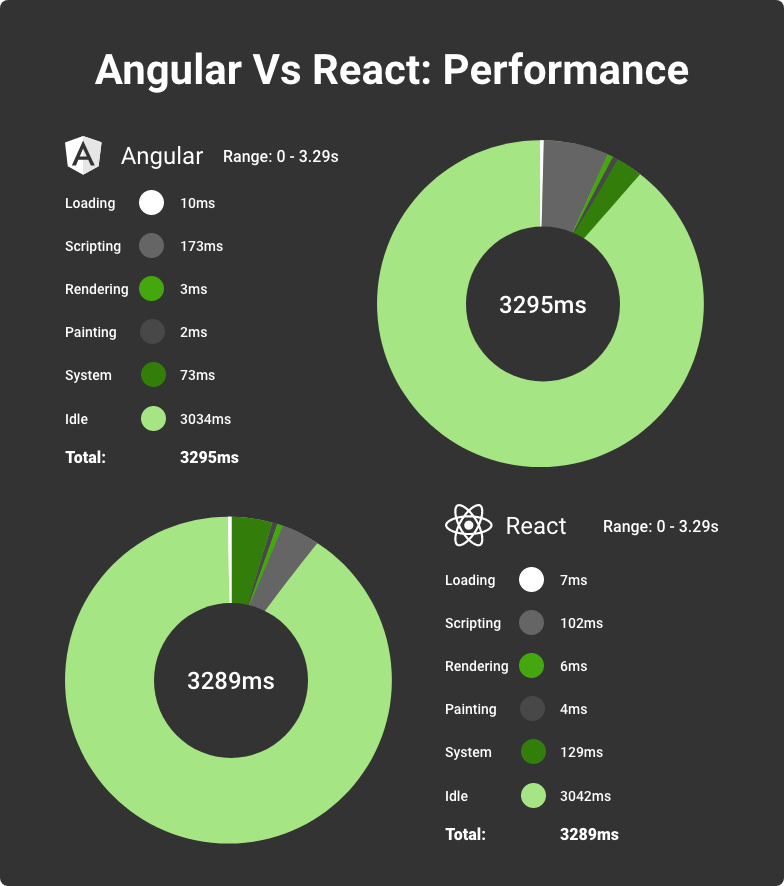 Dependencies are what make it easier to write code. When they are not applied, the developer has to create each method and class independently. This can be quite difficult, and many errors will occur in the process. Angular has a function for automatically linking components and excellent tools with which dependencies can be implemented in different ways. In contrast, React does not offer any concept for linking containers and components. However, to make it easier to write code in React, you can use third-party dependency injection frameworks like Browserify, RequireJS, EcmaScript, etc.

When working with Angular, directives are a way to gain access to the DOM. In order to make your own directives, templates are used, in which the attributes are written, while setting it up will take into account the properties of objects. As for React, it works somewhat differently, without providing for the division into directives and templates. The template logic must be written in the template itself. This approach generally results in less time spent on coding.

Componentization has been actively developing in the world of web apps. Its essence boils down to creating simple and understandable independent elements with hidden logic and styles. Web components are not a framework. It is a set of technologies implemented at the browser level for faster page loading.

Regarding the componentization of Angular, it has a very complex structure because it is based on the MVP model. When using Angular, the code is split into multiple files due to dependencies.

As far as Angular and React differences, with the latter, there is no "correct" structure for the application, so it provides a very simple and fast way to build components.

One-way data binding makes your code more stable and easier to debug and build an application. With two-sided data linking, data changes affect views and vice versa. However, due to the two-way data binding, the structure of the code is more flexible. 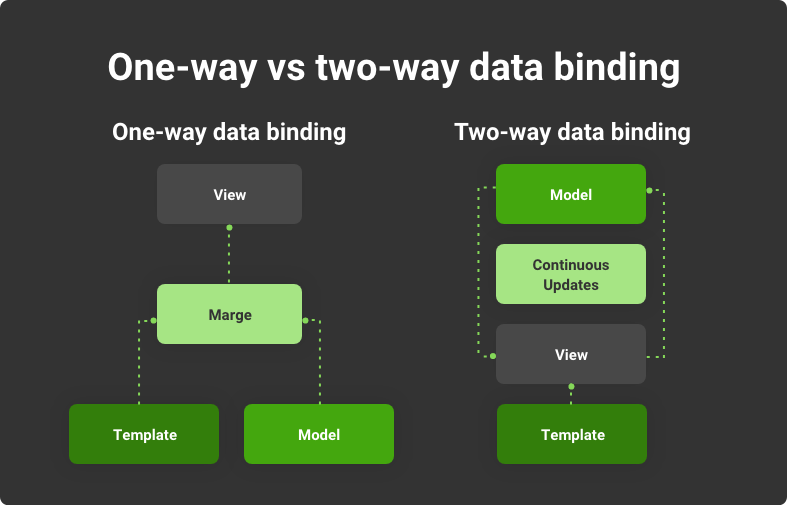 When you develop an application, it's better to think in advance about the project’s future scope. When building large projects, Angular is a great tool, as it has all the necessary built-in functions for creating big and flexible apps. With React, you have to rely on third-party tools to make your software scalable.

React is based on JavaScript in combination with JSX script. JSX is an extended script that makes JavaScript look like code written in HTML. This is done to facilitate the process of detecting errors in the code.

Angular is based on TypeScript, which is designed for large scale projects. The bottom line is that the code written in Angular is more compact, making the refactoring process easier and more accessible.

Angular has extended documentation, the study of which will take much more time than mastering React. In addition, given its architecture, the instrument itself is more challenging to learn, so it will take extra time to create an Angular-based project.

In case of the question which is better, React or Angular, here's an answer. As we said before, React has no dependencies and no templates, which makes this tool minimalistic. The lack of complex functions makes React easier to understand.

Angular has several essential built-in tools that make it easy to code. Third-party tools are often used to deliver a React-based application. Another difference is that the Angular code can be tested with just one instrument, while React requires an extended range of means.

According to various studies on Google Trends & Stack Overflow, React is more popular due to its simplicity. Nevertheless, many developers continue to show interest in Angular because it provides lots of ready-made solutions. Both technologies are rapidly developing, and the demand for Angular is also high. 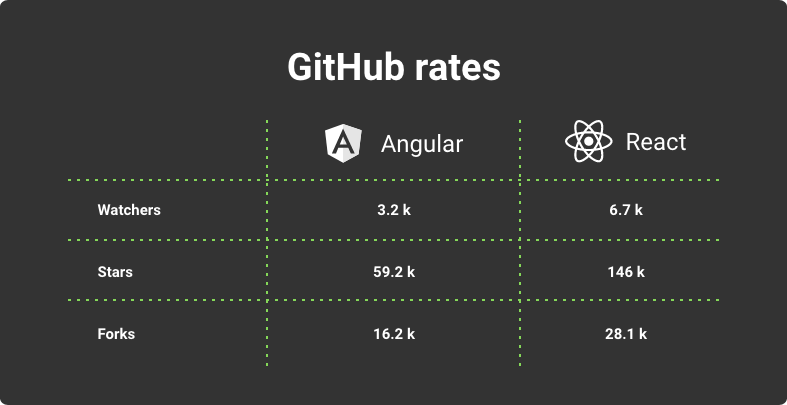 In this matter, React has a high benefit since it offers the creation of its own interface and the building of components in conjunction with the code written in Java, Kotlin, Objective-C, and Kotlin. Angular offers an Ionic framework for coding mobile applications that comes with the Cordova container. At the same time, the React Native platform, which uses the React structure, allows for the creation of native applications characterized by higher performance than those created in Cordova.

The Main Difference Between React and Angular

Based on all of the above data and our internal analysis, we have compiled a comparison table between React and Angular.

Create a great product with a strong competitive advantage by partnering with KeyUA developers.

Angular Framework vs. React JS Library: Which Is The Best Choice for 2022?

As you have already noticed, each tool has its own implementation features and purposes. But there are no "bad" or "good" technologies. They all pursue certain goals. Therefore, to answer, "Which is better for web development, Angular or React?" you need to consider a number of factors. And naturally, they should be identified in the context of your project.

Here are some questions that can help you make the right decision:

If your goal is to create a large and scalable product, you should create a minimum viable product before releasing a full-fledged version to the market. This is an application with a limited set of functions, or rather only the necessary features for the software to work.

The goal of MVP is to see in practice how effective the selected technologies are. Since users will be using the app in real-time, you will find out how good and productive your frontend is. Besides, the MVP makes it possible to make changes or even switch to using a completely different technology relatively quickly.

When to Choose Angular for Development?

So, let's summarize and define which cases it is worth giving preference in favor of Angular.

When to Choose React for Development?

As for React, it will be suitable for your project, in case:

Now we can see that both tools are very popular. However, they are aimed at solving slightly different issues. Therefore, when choosing a specific instrument, you should be guided by the goals of your project. For example, Angular is a good solution if you need a large and scalable product, while React's features are better suited for creating high-performance and dynamic pages. With all this in mind, Angular vs. React for mobile development is also a good option.

However, in order to create a high-quality product, the choice of technology alone is not enough. The quality of the code essentially depends on the knowledge and experience of the programmer. Therefore, we advise you to choose only reliable web developers.

Since 2008, the KeyUA team has been creating top-notch web applications. We are continuously updating our knowledge of using effective frameworks to deliver the highest quality product and meet clients' business goals.

How to Create a Custom Data Visualization Software?

How to Create a Mobile Shopping App on Android

How to Write a Good Project Specification

Project Discovery Phase: Why It Matters at the Start of Your Project