How to Create a Hybrid Mobile Application [Step-by-Step]

According to Compsore’s US Mobile App Report, users spend 90% of their time accessing applications, and the remaining 10% on the web. At the same time, in 2019 alone, consumers downloaded over 204 billion mobile apps. Such statistics indicate that mobile applications are a relevant niche for doing business, and it is developing rapidly. Building a custom app is a hot topic, so let’s dive deeper into the essence of hybrid mobile apps and check their pros and cons. 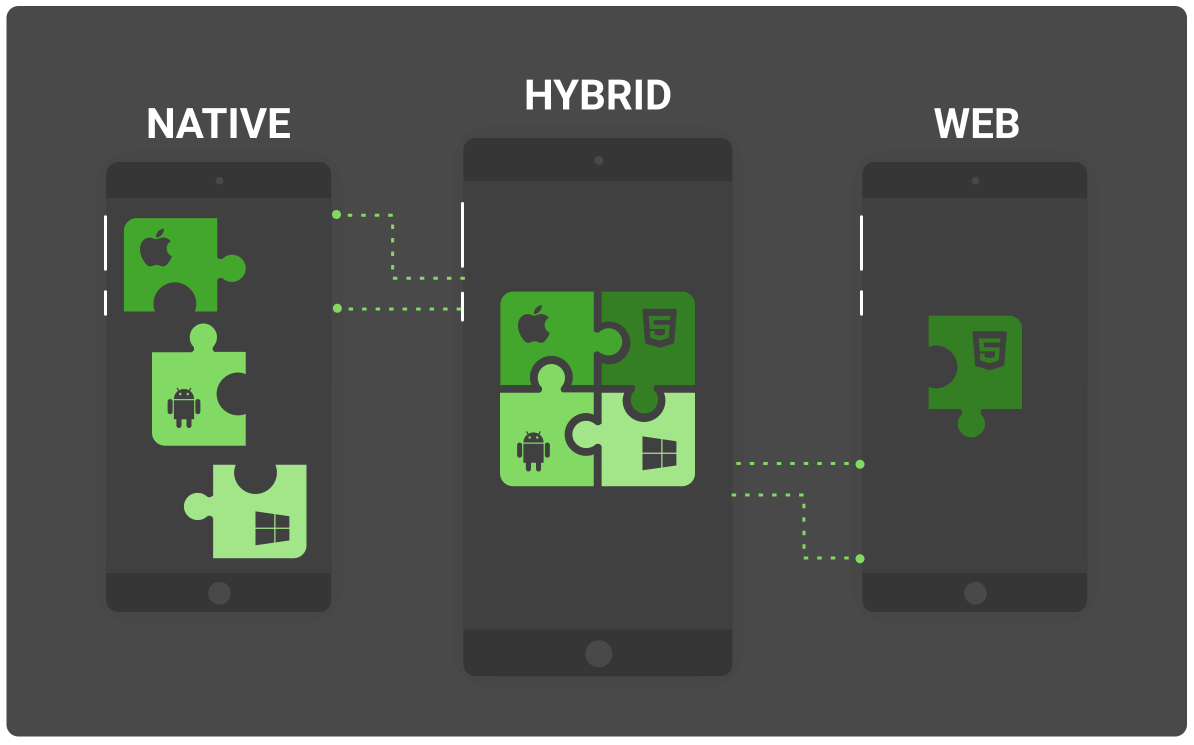 What Is a Hybrid App

Hybrid apps combine the characteristics of a native and web application. It may look like a native app but will work entirely differently. Just like a native app, hybrid apps must be downloaded to a smartphone or tablet. At the same time, they contain components of websites or web apps that are not installed on the device but are available through an Internet browser.

It's necessary to know all the same HTML5 and JavaScript used to build web products and corresponding back-end frameworks to create hybrid applications.

Various studies show that the number of hybrid applications on the market has increased by 40% over the past three years. Such products are gaining more popularity due to two indisputable facts. They take less time to create than native apps, and their code can be used for multiple platforms and even on the webspace to help businesses grow their opportunities.

As we can now see, hybrid applications are a mix of web and native aspects. Hybrid apps work by contacting web services but still must be installed on the device. The development of such products combines the knowledge and advantages of the native and web approach. So when building hybrid apps, a developer must have the background and skills of working with both web and mobile technologies.

Hybrid apps are normally considered a compromise in terms of user experience. It takes a great deal of extra work on the part of HTML5 developers to try to produce platform-consistent user interface behavior, which typically falls short of that of the native UI.

Several key metrics affect how willing consumers are to use the app. We will consider them in more detail to see which approach to software development is the most effective. 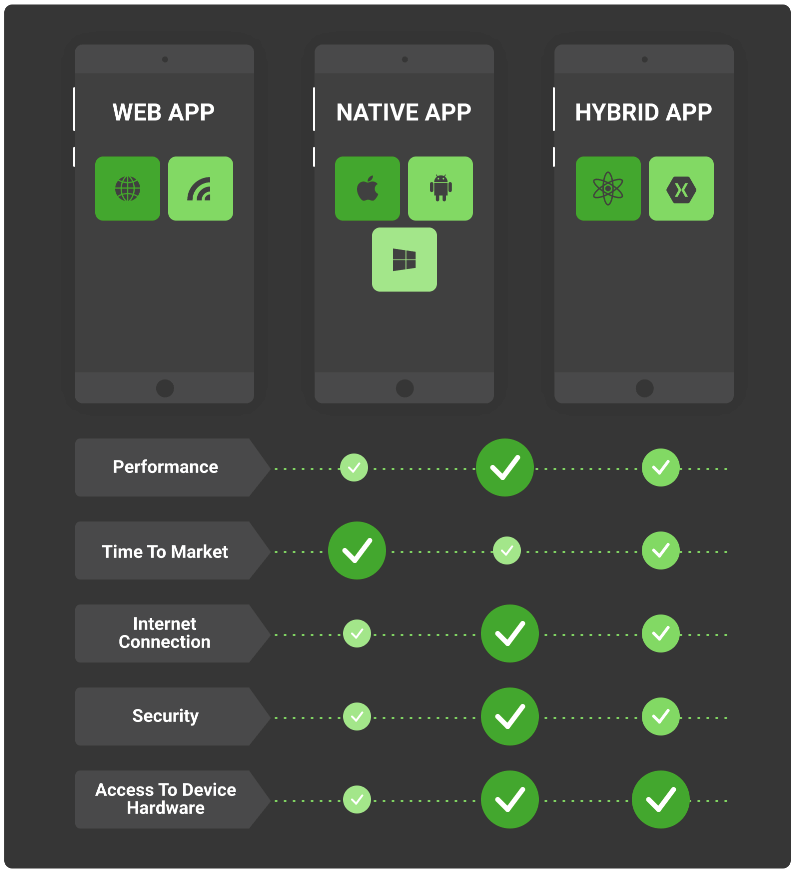 Google posted a report showing that 70% of users abandon an app if it works too slowly. When it comes to performance, even the most loyal hybrid fans confirm that native apps are faster. This noteworthy difference between native and hybrid apps takes place due to the essence of software building.

The bottom line is that all the native application elements are already available on the user’s screen when they open an app. In the case of a hybrid approach, the process takes more time to contact the server and database and load separate web elements. A web application has the poorest performance among the three types of software because it takes the most time to load and connect to all the necessary web services.

In any of these cases, time is critical, so let’s compare how fast it is to develop each application type. It should first be noted that the time required to build a product depends on the application’s goals and functions. But we'll look at the average indicators. It takes at least three months to release the first version of a web application to the market. It will take about five months to launch a hybrid app while building a native application takes half a year or more.

Hybrid products are web apps wrapped into native app containers, so they will be available even if the Internet is offline. But you also need to pay attention to the application features, as some hybrid apps still need an Internet connection to work clearly. And finally, native applications are installed on users’ devices; thus, they are always available.

4 Reasons Why Hybrid Development Is The Best Option

If you haven't already decided which approach is best to choose, here are some powerful arguments for creating a hybrid mobile app.

The truth is, the user cannot tell a hybrid from a native app. Now get ready to learn some of the commonly used applications that are hybrid. 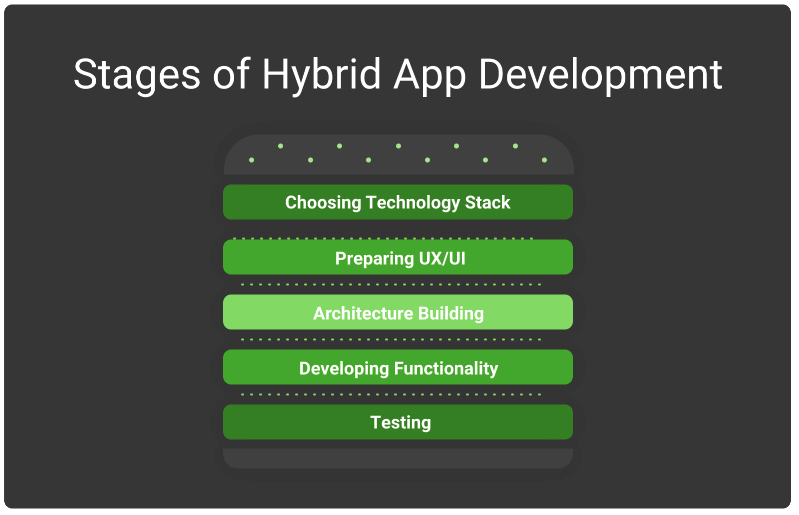 The basis for creating any mobile application is an idea. In other words, what your application should do, what its purpose is, and what result you want to get. Once you have a well-thought-out product idea and concept, you can start developing your app. This process covers several essential steps, from deciding which technology to use to testing the finished functionality.

A hybrid application is convenient because you only need to write one code, which will work on Android and iOS, and it can be used to create web applications or desktop versions. Below you will find a list of the main languages that have proven effective in building mobile applications.

This framework is very popular for building hybrid mobile apps due to reusing a large part of the code during development. This significantly saves time on building the product. Nevertheless, Xamarin has a significant drawback - its versions are renewed much more slowly than Android and Apple release their updates. So the application may have severe errors.

This is a relatively new technology used to develop hybrid applications released by Google. It provides for relatively rapid development and uses modern methods of building apps, which significantly saves time. But, since this is still a new tool, its capabilities make it very difficult to create enterprise applications.

This is one of the powerful frameworks to develop hybrid apps. It has everything you need to create an efficient and scalable product quickly. Since this tool is also relatively new, it is more suitable for building startups or meeting medium-sized businesses’ needs.

For over seven years, this tool has been used to create mobile applications in various industries. It is fast, convenient, reliable, and cost-effective. React Native is great for building applications of any size and purpose.

Previously known as PhoneGap, it's a popular cross-platform tool that helps to develop hybrid mobile apps too. The framework can be extended by connecting custom modules, allowing developers to implement additional functions and access the device’s internal components (camera, compass, microphone, etc.).

52% of users said a bad mobile experience made them less likely to engage with a company. If you want your application to be exciting and attractive, you should take care of creating a high-quality design. Every detail of an interface should be properly thought out to help users enjoy your app.

On this note, it is a bad idea to use standard templates, as they will not look aesthetically due to the differences between the iOS and Android platforms. When focusing on hybrid vs. native mobile app development, you will need to create layouts for Android and iOS separately.

The future success of a project largely depends on its architecture. The architecture of a mobile application is a combination of various factors regarding how applications will function. They include code, data storage methods, structural elements, purpose, behavior, etc. Architecture is essential in projects of any complexity.

Bad architecture or its absence in the early stages of development will lead to the fact that the application will be much more difficult to modify and update in the future and maintain its high-quality performance. The specificity of software building is that there is no clear answer to what kind of architecture is effective. The choice of its elements should be based on the goals and features of the application itself. So in this matter, you will need the help of experienced programmers.

Hire trusted developers with 12+ years of experience building mobile apps of any complexity.

When the issue of project architecture has been resolved, it's time to create the application functionality. Custom mobile development services include building a backend and a frontend of an application per the project specifications, while the product is created simultaneously for Android and iOS.

The duration of this stage depends on the volume of tasks. The more functionality you need to implement and the more complex it is, the more time it will take. But on average, it takes from 3 to 4 months to create a prototype, which is a cut version of the application that contains only a set of basic functions.

The final stage in the process of building an application is testing it. Many startups skip this step, trying to reduce the project’s cost, which is a huge mistake. QA testing services are the process by which the application’s actual functionality is compared to the product requirements described in the documentation.

At this stage, QA specialists identify bugs and other issues due to which an app shows the incorrect behavior. All these cases are fixed before the product will enter the market. Effective testing takes place using native devices. In the case of the development of hybrid apps, it should be tested step-by-step in parallel with the use of Android and Apple gadgets.

Since we already figured out how to build a hybrid application, it's time to estimate its cost. Unfortunately, there is no fixed price for building software. You can spend $1,000 or $10,000 to make a product, and the quality of the two applications will be extremely different.

The cost to build a hybrid app is influenced by such factors as the volume of tasks, the complexity of the functionality, the number of team members, and the hourly rate. In some cases, the project price can be high. And there may come a desire to save money, but such a decision can lead to negative consequences. If you choose a less skilled but cheap developer, the quality of your product will suffer greatly. As a result, you will spend additional money to fix the previous work. The best option is to choose experienced developers who can also advise on effective ways to reduce the product’s cost.

Using a hybrid approach, you can create not only a cost-effective but also a high-performance application. This path offers an easier and faster way to build a product compatible with all operating systems. If you want to develop reliable and scalable software, choose only trusted developers.

At KeyUA we have been building first-class custom mobile apps for over 12 years.

9 Reasons to Create a Mobile App for Advertising Agency