Companies in almost every industry are moving to the “Mobile First” approach, making their services and products available for customers from mobile devices. Businesses and developers want tools that help optimize time and budget yet provide robust performance, fancy UI capabilities, and ease in further maintenance. React Native is the clear TOP choice, and it’s no accident. Find out the main reasons to use React Native for your mobile app creation.

What is React Native?

React Native is a JavaScript-based framework for cross-platform development, i.e., creating mobile applications that can run on multiple platforms with a single codebase. It was developed at Facebook as an internal project in the summer of 2013. They invented a way to use ReactJS in mobile app creation, and in March 2015, it was released to the public. Over the last five years, it has become the most popular choice among cross-platform development frameworks: 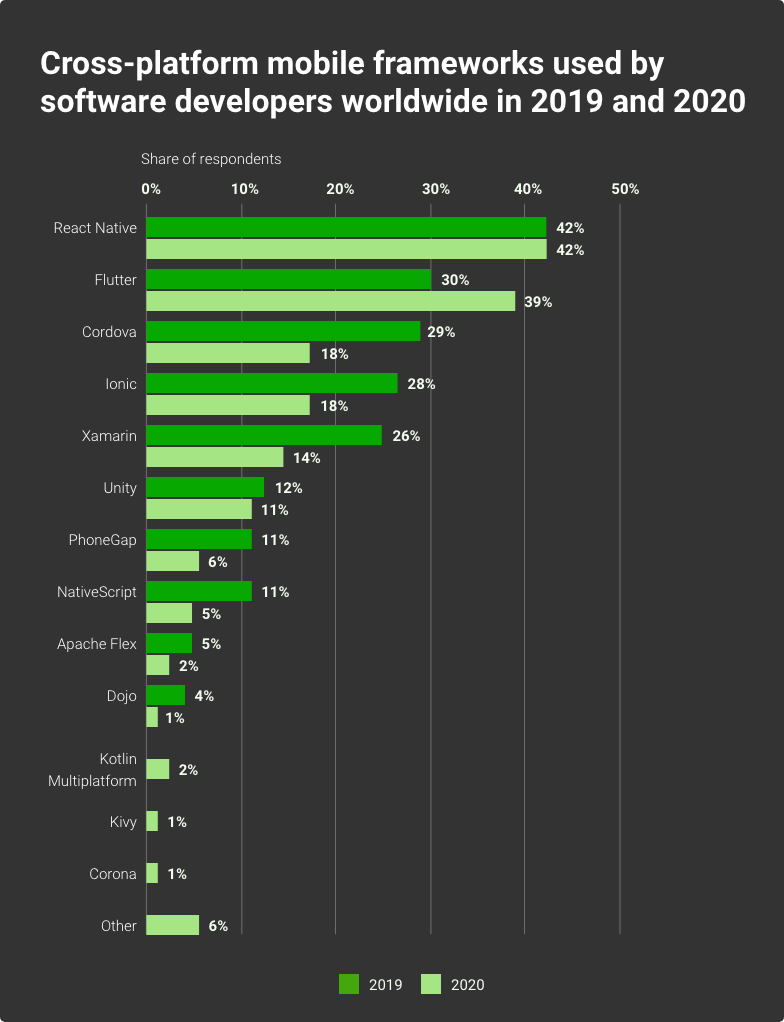 Choosing a platform for mobile app creation is a big dilemma for many companies. There are more Android users than iOS worldwide. However, iOS users generate more revenue. React Native app development helps to fill the gap between a broader marketplace and a bigger profit. Now the companies can have both.

Have an idea for mobile app development? KeyUA engineers are ready to deliver a powerful solution to reach your business goals.

When considering the platform and other mobile app creation tools, it’s often a struggle to balance flawless performance, quick deployment, fast development pace, exceptional user experience, etc. Choosing React Native for mobile app development can be a compromise between these priorities. Here’s what this framework brings to the table.

A considerable advantage of cross-platform mobile development is having a single code base for both platforms. It reduces the time and cost required for app creation. Depending on the features, 70%-90% of the code is reused between iOS and Android versions. The main code is written on JavaScript (ReactJS). To connect native components of the mobile app with ReactJS code, it uses a so-called bridge:

This is React Native Architecture

If you have created the basis for an iOS app with React Native, it can easily be compiled for the Android version with some minor changes. There are additional React Native libraries that also allow using the same codebase for a wider range of platforms:

Compared to cross-platform development with React Native, you may need a 5-10 times larger budget for building native app versions.

In short, fast refresh allows developers to inject new code or modify the existing one directly in a running application. A developer can see the result of any code changes instantly with no need to rebuild the application.

There is no risk of breaking the app or losing some critical elements during the code edits, as fast refresh also provides recovery features. You don’t need to reload the app manually after fixing runtime errors or syntax. It automatically retries rendering after a developer saves a file.

Fast Refresh in Action: see the result of any code changes right away

As opposed to other multiplatform solutions like Cordova, Titanium, or Ionic that imitate a browser environment, React Native uses Native APIs replicating native-like user experience. There are no problems with tabs and scrolling. The user interface behaves with the same responsiveness as in a classic mobile app, without WebView and other similar tools under the hood. As a result, React Native mobile app development allows meeting users’ expectations. It perfectly fits projects where you don’t need the native-like app's complexity, but its speed and performance are necessary.

The updates are installed automatically. There is no need to perform standard manual updates via App Store (for iOS version) and Play Store (for Android). Automatic updates also eliminate risks for problems with earlier versions.

However, it is applicable only for the JS part of the app. Any updates related to native components still require a traditional install process.

Most mobile applications feature unique branding elements ignoring the platform. It is much easier to integrate such individual elements for apps based on React Native than Native. You can quickly implement design tweaks preserving the ‘native’ feel and keeping consistency between Android and iOS versions.

With the variety of Android-based devices, it can be a problem to keep consistent with how apps are rendered on each device. React Native features flexible layout engines that adjust to various screen resolutions. They also support HD graphics and provide excellent compatibility with all available device sizes.

If you prefer statically-typed programming languages, you can still use React Native for iOS and Android app creation, thanks to TypeScript support. Static typification practice implies fewer bugs and more straightforward project maintenance with the ability to create a lightweight application from a template.

Mobile developers admit that React Native projects require up to 50% fewer tests. You can create the same tests for both platforms, reducing time and cost for QA. There can be specific tests for each OS version in some cases. However, if both versions have the same functionality and UI logic, testing will take less time than native mobile app development. The most popular testing tools for React Native include:

9. Developers Get Freedom of Choice

Developers tend to have their own preferences in tools. React Native supports tons of third-party libraries that give the freedom to choose development solutions. Based on the project’s requirements and other specifics, including personal preferences, you can pick precisely the toolset for your cross-platform project. For instance, you can choose between JavaScript and TypeScript or various ways of handling the global state. You can write your own UI library or use one of the ready-made libraries and customize it for your needs.

The number of available tutorials, libraries, and frameworks is countless. They provide a steep learning curve, especially for developers with JavaScript experience. A massive and responsive community makes it easier to find talented, reliable developers for your projects. In this aspect, React Native is better than other cross-platform alternatives like Xamarin or Flutter.

Not sure if React Native is the right choice? Let our experts select the best stack of technologies to fit your project specs.

The Downsides of React Native

React Native also has some drawbacks that limit its usage. The major disadvantages include:

There are cases when mobile app development with React Native is not the best option. If you are planning to create a custom app that will contain:

Using a cross-platform framework would not be enough to create smooth and stably working products. In this case, you should probably consider developing independent native app versions.

When Apple or Google releases some new feature or another massive update, it will take some time until the third-party framework adds its support.

Also, with React Native, it can be tough to achieve ultrahigh performance speed and complex processing. Apps based on it take more time for initialization compared to native apps. If you plan to heavily extend the app’s functionality in the future, this framework may also cause potential issues. For example, after three years of using React Native, Airbnb turned to native development. Their challenges included too much testing and debugging across platforms and the need to maintain three development environments (React Native, iOS, and Android). The framework itself evolves quickly, causing specific debugging problems.

When to Use React Native?

There are projects when cross-platform app development makes more sense than going with more expensive and time-consuming native development. If your application is mainly based on business logic and UI, using React Native is a perfect option. It is recommended in the following cases:

There is a misconception that React Native is suitable only for some small basic applications. However, it is far from reality. Today this framework is actively used to implement mobile app ideas of any scale. To name a few: 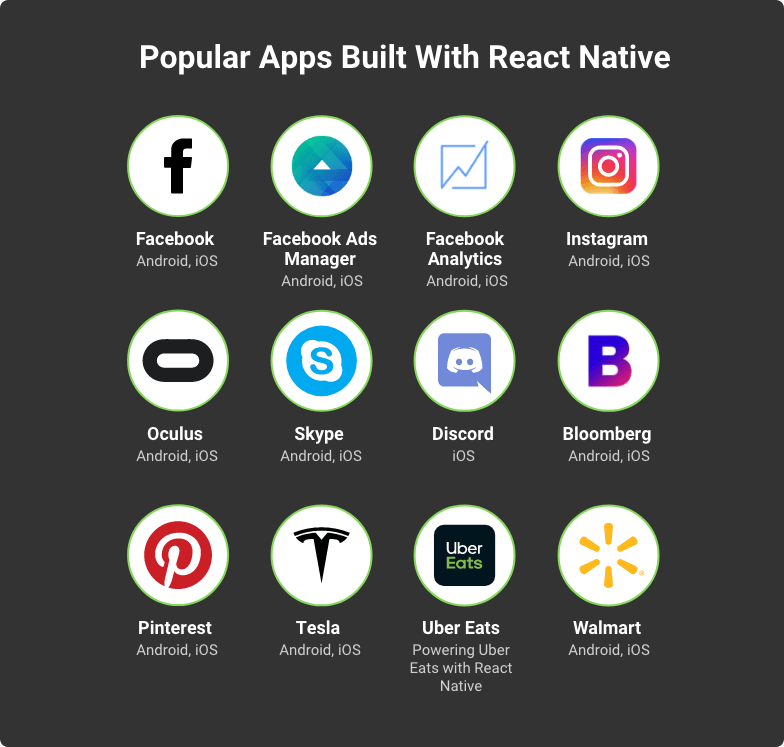 As you see, there are multiple industries where React Native has become the best choice for mobile development. It is perfect for classic e-commerce, events, lifestyle apps, analytical tools, and even messengers. Using this framework is not limited by the specific industry. Its usage is reasoned by technical requirements to the app and its UI appearance and interactions.

With all the benefits, React Native is a rapidly evolving technology that, for now, has certain limitations. However, it offers fantastic capabilities for enterprise and e-commerce app development. Top brands like Facebook, Tesla, and Bloomberg successfully use React Native, and you can appraise their mobile applications' quality. Agility, high efficiency, low cost, and workload make React Native a number one choice for cross-platform web development.

To apply all its benefits in your projects, hire a professional remote team with expert qualifications. The KeyUA development company has versatile experience in building mobile applications on React Native and provides end-to-end solutions across various industries. Our experts will find the best options to deliver robust mobile products on-budget, fitting your personal business needs.

Reap the benefits of cross-platform mobile development using React Native for your own business.

How Much Does it Cost to Hire a Mobile App Developer

How to Build a Chatbot with Python in 4 Easy Steps