In the early days of application development, a few lines of binary code was enough to make this thing work. In 2021, this process requires several milestones or development methodologies that work perfectly with each other. They are LEAN, Agile, and DevOps. All these approaches are aimed at effective, seamless, and bug-free application development while making smart investments and always keeping user-market specifics in mind.

Each of the methodologies suggests using different tools to streamline the development process. As for DevOps, Kubernetes, Docker, and Vagrant are some of the platforms that make this approach effective. Let’s find out how the last two work and which one would be the best choice for your project.

Containerized Approach vs. Deploying Virtual Environment  - Where the Problems Come From

So let's start from the very beginning. What is the ultimate goal of developing any application? The ultimate goal is to build all the architecture and logic in such a way that the application works equally well and correctly regardless of device, operating system, version, and development stage. However, how can you be sure that this is so?

In response to this question, it makes sense to say a few words about the DevOps approach, which brings the development process and application operations closer together. As part of this approach, all specialists working on the application become closer to each other and share the responsibility for the application’s correct operation. Each created part is carefully checked and tested before work on the next stage begins.

Let's suggest we have an application or its part. How to make sure that it works the way we intended, but without resorting to using dozens of different devices? To do this, we need a virtual development environment that will ensure that our application works in the same way originally intended. Vagrant and Docker are two platforms that solve this problem; however, they do it differently.

According to research, “Docker and Vagrant are two tools that could be used to provision infrastructure. Vagrant is a tool used to automate the configuration of virtual machines, while Docker encapsulates the project into containers.”

To put it simply, Vagrant allows us to create a virtual environment depending on our requirements, while Docker containers applications with all its code, dependencies, libraries in such a way that it is easily deployed and seamlessly works in any virtual environment.

Let's take a closer look at how these two platforms work.

Vagrant is a tool for creating a virtual machine that completely repeats the user experience according to the specified settings. That is, Vagrant allows you to mirror the operating system and all the necessary configurations to see how your application will actually work in a particular environment.

Docker is a platform that allows you to containerize your application and create so-called microenvironments for deploying an application without having to run an entire virtual machine. Each container is an isolated virtual cell that contains a specific scenario for the application.

Thus, developers, testers, and DevOps engineers can spend less time debugging and finding critical differences in application performance in different environments. This means they can better deal with potential bottlenecks in the pre-production stages of the application development.

What’s the Main Difference Between Docker and Vagrant

It is possible to highlight three key aspects that determine the fundamental difference between the two platforms.

The main difference between Docker and Vagrant is how these tools approach deploying a virtual environment. While Vagrant allows you to create an entire virtual machine, Docker packages your applications into miniature containers deployed in a predictable scenario.

Another fundamental difference is the number of resources that both platforms require to cope with the task of deploying a virtual environment. Since Vagrant allows you to create an entire virtual machine, it requires more resources and time. In contrast, Docker's containerized approach enables you to deploy applications from containers faster and with less resource overhead.

It is also worth mentioning the level of security. Virtual machines and containers are fundamentally different when it comes to security. The virtual machine is entirely self-contained and isolated. So it does not share resources with other virtual machines since they have their own operating systems.

Containers work differently. They are also isolated, but each accesses the guest operating system, making the security boundary difficult to grasp.

Docker vs. Vagrant for Development - the Comparison Chart

So let's make a Vagrant vs. Docker comparison using basic criteria for building and deploying your application efficiently.

Docker or Vagrant - Which Is Better for the Development Process

Let's briefly summarize and visually compare the advantages and disadvantages of each of the platforms.

According to research, “Docker performed significantly better than Vagrant in both tests. However, due to the limitations of the study, this cannot be assumed to be true for all use cases and scenarios, and performance is not the only factor to consider when choosing a provisioning tool. According to the data collected in this study, Docker is thereby the recommended tool to choose, but more research is needed to determine whether other test cases yield different results.”

Thus, the correct answer to this question depends on your project’s specifics, which we suggest dwelling on further.

Docker vs. Vagrant - Types of Projects Each of Them Is Suitable for

So, Docker is good for:

However, Docker is not suitable if you prioritize security, have multiple operating systems, or deal with GUI-based applications. Vagrant, in turn, is well suited for large projects that seek improved security, but at the same time, may afford to sacrifice speed and resources.

Using Docker With Vagrant  - How Is It Possible 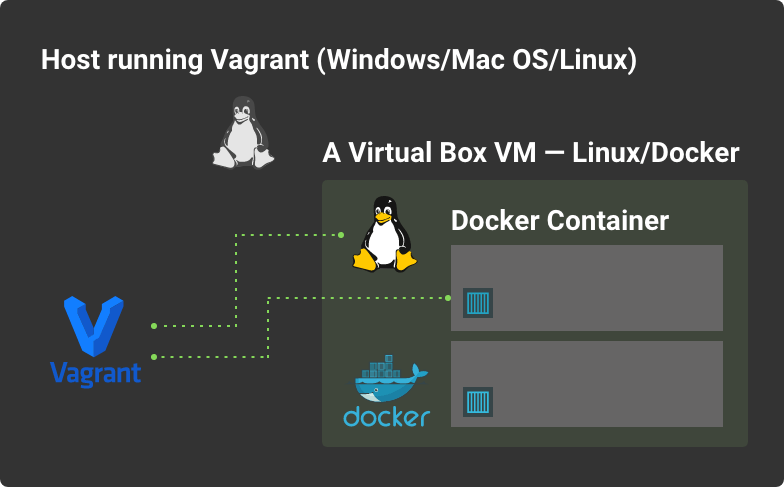 Using Docker in conjunction with Vagrant is possible since Vagrant integrates with Docker by default. Thus, you can use Docker as a provider for Vagrant to automatically create images, pull them, and run containers and customize files.

However, for this interaction to be possible, you still need Docker by itself, which can be challenging since not all platforms support Docker.

We have covered the specifics and use cases of Docker and Vagrant for the development process. Of course, the use of each of the tools implies a strong technical background, plus it is necessary to take into account the specifics of your project when choosing the right platform.

As a rule, Docker is a more reasonable alternative due to its simplicity, good usability potential for small and medium projects, and low resource consumption with the simultaneous potential to increase the efficiency of the development, debugging, and testing processes.

You may also agree on the use of this tool with your development company. Our experts are ready to share practical insights and give you more specific advice taking your project requirements into account.

Can’t afford to make a mistake with your DevOps tools choice?

thanks for very clear and nicely done explanation!

How to Build a Face Swap App Like MSQRD

The Future of the Internet of Things (IoT)