Companies worldwide are launching chatbots to engage in conversations with customers and employees, delivering critical information and improving service. They help automate various tasks and are involved in administration. According to Small Biz Genius, 1.4 billion people use chatbots. The demand for the development of virtual assistants is growing rapidly, so today, we will review the best programming languages for building chatbots.

What Are AI ChatBots?

A chatbot is a program that simulates a conversation with users to provide them with certain information. Chatbots are actively used by messengers, social networks, mobile applications, and websites. It is now an indispensable tool for online sales or consulting services. Modern chatbots use artificial intelligence technologies to engage customers in conversation, facilitating interaction and improving service quality and efficiency. Chatbots are designed to simulate convincing human behavior as an interlocutor, so they require constant calibration and passing the Turing test, the essence of which is to determine whether a machine can think. Looking ahead, we note that a machine didn’t pass this test for the first time until 2014.

A Brief History of Chatbots Development

This kind of software has become popular relatively recently, but its prototype was created in 1966. Joseph Weizenbaum, professor at the Massachusetts Institute of Technology, released a program called ELIZA. Its essence was to conduct a conversation with a person using natural language processing. ELIZA parodied dialogue with a psychiatrist. As it did not have artificial intelligence, the program singled out certain anchor words and, based on them, built its questions and the subsequent dialogue, which quite accurately repeated the doctor’s actions.

The next exciting development was PARRY. Released in 1972, it featured an improved dialogue portion. It was created at Stanford by psychiatrist Kenneth Colby and simulated the dialogue of a person with paranoid schizophrenia. PARRY underwent several serious tests, the essence of which was to determine where the real patient is and where the machine is - in half of the cases, the experts could not give the correct answer.

In 1978, the "LIFER / LADDER" - one of the first known NLP databases was created. The program could not maintain a dialogue but gave answers to simple one-fold questions. Its database served to create modern versions of chatbots.

In 1995, Richard Wallace created A.L.I.C.E. (also referred to as Alicebot or Alice), which for over 20 years was considered the most powerful virtual interlocutor. The program was written in Java. It has supported dialogues on over 40,000 topics. Many modern chatbots still use Alice’s database as a basis for dialogues. However, neither A.L.I.C.E. nor its predecessors were able to pass the Turing test.

The first real chatbot was developed in 1997. It was the online app named Jabberwacky, designed by British scientist Rollo Carpenter. The app used artificial intelligence and machine learning technologies. Jabberwacky became one of the first entertainment bots, and the program could conduct a dialogue on lots of topics.

Let's take a Look at How the AI Chatbot Works

The active phase of chatbot development began in the 2000s. They formed the basis for the creation of messengers, smart speakers, and virtual assistants.

In 2016, Facebook launched the Messenger platform, which allowed developers to create smart bots to connect with users. About one and a half months after the launch, 11 thousand bots were created on the platform. Juniper Research claims that by 2022, more than 90% of businesses will use chatbots to communicate with customers.

AI-based chatbots and virtual assistants are already deeply rooted in our lives. The development of appropriate programs is essential for any company that wants to improve service quality and interaction with customers while reducing costs. Below we will consider the most effective programming languages for building chatbots.

Create the first-class chatbot on favorable terms for your business.

Python is one of the most beloved languages of chatbot developers, and it is also a pretty popular tool for designing web projects. It was created back in 1991 and is a robust programming language focused on improving developer productivity and code readability. Python has AIML, an artificial intelligence markup language that makes it easy to create product syntax. It also has ChatterBot and PyNLPl libraries for building language models. Natural Language Toolkit, which is the prototype of modern NLP, was originally written in Python. 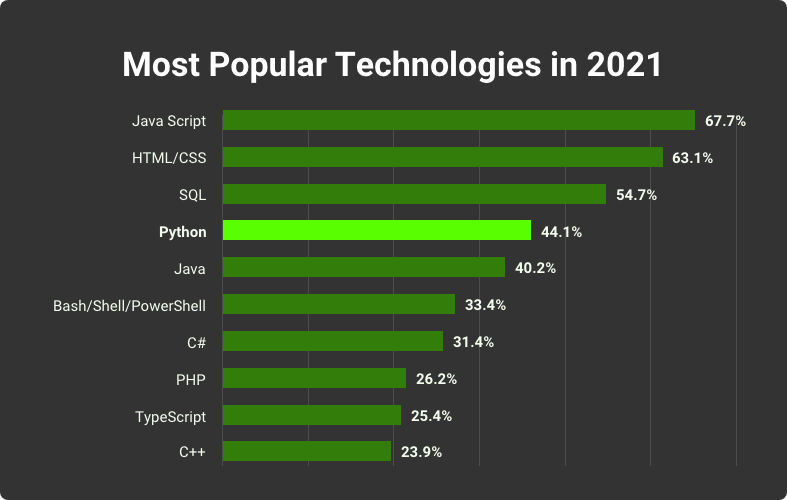 Most Popular Technologies in 2021

Python has a minimalist structure and simple syntax. That's why even a beginner can start chatbot building in Python. It is also actively used to create projects with machine learning, which allows its libraries to be constantly improved and enriched with "knowledge.” Key features of building an AI chatbot with Python include:

Thus, it turns out that the chatbot building in Python is a profitable and affordable way to help your business meet its goals. This programming language has an extensive community, which lets developers quickly receive support and advice regarding the use of its libraries and Python itself in general.

Java also ranks in the list of the best languages for chatbots based on artificial intelligence. Being a competitor to Python, Java is a very popular tool for creating web (and desktop) projects. Its code can be smoothly run on a variety of platforms without recompiling virtual machine technology. This programming language has all the essential features for an improved interface, allowing it to perform powerful chatbot building in Java.

The standard widget and language visualization function can additionally help a programmer to manage the work regularly. Besides, it is also very convenient and easy to code due to its complete and voluminous libraries. When building an AI chatbot with Java, it's possible to highlight the following advantages:

At the same time, Java has some disadvantages. They are based on the fact that the programming language is slower, which means more response time is required. As far as AI is concerned, this is still an imperfect tool, so third-party support may be necessary to make a chatbot in Java. However, it is worth noting that it is a productive and reliable development tool.

Lisp was purposefully created as a programming language for projects with artificial intelligence. That is why it is excellent for creating AI-powered chatbots. Lisp was released in 1958 by John McCarthy and is still a robust tool in its field. It went through fundamental standardization for military and industrial use, making it a powerful programming language. Thanks to its evolution, this tool has become more dynamic.

Building an AI chatbot with Lisp allows you to solve specific problems quickly due to the language’s adaptability. One-off modeling and prototyping are widely used in teaching, designing, and developing the multilingual capabilities of chatbots. Thanks to its rich libraries, Lisp-based programs process symbolic information quickly enough, thus giving a faster response.

Lisp is now widely used for inductive logic and machine learning problems. By making a chatbot in Lisp, you can get the following:

As we said, Lisp was founded to build AI programs, but it is no longer the primary tool anymore. The thing is that its syntax is quite complex. And this is a big drawback in comparison, for example, with Python. Nevertheless, it can be used as an additional tool, so chatbot building in Lisp is still relevant.

From idea formation to successful implementation, at KeyUA we deliver effective solutions for the needs of any business.

Clojure is a Lisp dialect that encourages functional programming and interactive development and simplifies multithreading support. It runs on the Java virtual machine, although it is an excellent programming language for chatbots as a standalone tool. Its peculiarity is that Clojure allows you to create an application with easy-to-test functions. Java framework allows Clojure to access optional type hints and inference. Despite this being a relatively new tool, first appearing in 2007, building an AI chatbot with Clojure has quickly become an available and reliable option.

Clojure allows access to reactive agent systems and transaction memory, resulting in clean and multi-threaded code. The main features of making chatbots in Clojure include:

Clojure was conceived as a modern platform for functional programming, making its syntax easier to understand. Many companies worldwide use chatbot buildings in Clojure since all aspects of this dialect are perfectly applicable to the construction of AI products.

PHP is a general-purpose scripting language that is heavily used for developing web applications. It is pretty easy to code due to its simple syntax, so chatbot building in PHP is more accessible than Lisp. Since its main focus is on creating web projects, PHP makes it possible to easily connect chatbots to various third-party applications. PHP is a high-level programming language that makes development relatively fast and efficient.

By making a chatbot in PHP, you can build a product of any complexity. This programming language is simple enough to learn, allowing even a beginner to create simple virtual assistants.

The use of PHP opens up access to many extended libraries. This is another of the reasons why building an AI chatbot with PHP is so easy and affordable. Here are some more benefits to consider when choosing this language:

Ruby is an object-oriented programming language for building web projects. Its syntax is a bit like Python. Created in 1995, Ruby is a polished and efficient tool for building custom projects of any complexity. Because it has many powerful libraries, Ruby is considered an excellent language for chatbots designing. It has a dynamic system that also supports automatic memory management. That is why building an AI chatbot with Ruby is so affordable. Later, you may need a license to use Ruby, which will increase the development cost. But note that this tool is very effective for solving complex problems.

Ruby supports multiple programming paradigms and has a dynamic type system as well as automatic memory management. By and large, even a beginner can start chatbot building in Ruby. However, it is less flexible since Ruby is not so independent as Java or PHP. Overall, it does a good job of building scalable products. Here are a few more key features of making chatbots in Ruby:

C++ is a good choice for machine learning and neural network structuring projects. It is recognized as the fastest programming language, although its syntax is quite complex. This is one of the reasons why many developers fail to make chatbots in C++.

This tool provides programmers with a high-level abstraction to create projects that are optimized for increased performance. Here are some more important options of chatbot building in C++:

The chatbot market is growing at high speed because these assistants know how to close simple requests, collect and qualify leads, organize meetings, and sell. They allow a business to be available 24/7 while reducing customer service costs. Chatbot development is more important than ever for many companies today.

We've covered 7 of the most popular tools for creating a project, and they all have certain advantages and disadvantages. So the choice of a suitable programming language should be primarily focused on the needs of your product. At the same time, Python is a great tool for the fast and high-quality development of AI chatbots. By choosing this programming language as the leading technology for your product, you get a reliable and stable solution. At KeyUA, we have 13+ years of experience building powerful web projects with Python. And we are happy to implement ideas of any scale to help your businesses grow.

We deliver top-notch solutions to help companies achieve strategic goals. Our experienced developers use the best technologies to build a successful product.

The Future of the Internet of Things (IoT)

Kubernetes vs. Docker: Comparison of Platforms