6 Benefits of NFC for Your Business

Near Field Communication (NFC) is one of the core concepts in instant and contactless payments technologies. However, the possibilities of NFC go beyond instant payments. This relatively simple, safe, and affordable innovation can be used across different industries making data exchange faster, improving customer service, enhancing business processes control, and giving rise to various new business ideas.

In this article, we will explain the potential of near field communication technology, its benefits for business from different areas, and the ways to implement it in 2021.

The concept of NFC is quite understandable. So what is it in simple words? In a nutshell, this technology allows two devices to communicate with each other, performing different business tasks while in close proximity.

According to research, “In present days, a new communication technology known as NFC is becoming popular in mobile smartphones. This technology needs two NFC compatible devices placed very near to each other (less than 4cm) in order to communicate. NFC operates at 13.56 MHz and can transmit information up to a maximum rate of 424 Kbits per second.”

NFC payments are the simplest example of how this technology works. Every time you bring your smartphone or smartwatch to a payment terminal to pay for a purchase, this technology starts working by reading your credit card information and transmitting it to the banking system. Most POS terminals already come with this technology embedded, like most smartphones and smartwatches. If the latter supports a payment app like Apple Pay (iPhone) and Google Pay (Android), this means you can use NFC technology for instant and contactless purchases.

However, mobile payments are not the only option to use NFC in your business. There are also several NFC usage models that may help with different business tasks.

Near Field Communication ( NFC ) research from 2012 describes six ways NFC can be used.

However, the use of NFC according to any of these models implies a second device’s presence in addition to the user's smartphone. This device may take the form of an NFC tag or an NFC sticker, which is a microchip with a small amount of information embedded. Most POS terminals already come with this built-in microchip, but there is a need for the additional purchase of such devices when it comes to other NFC use cases. Fortunately, they are sold online at an affordable price, plus the option to buy custom NFC tags is also available.

So, NFC is widely adopted by different companies because of the following NFC benefits to corporate and private users. 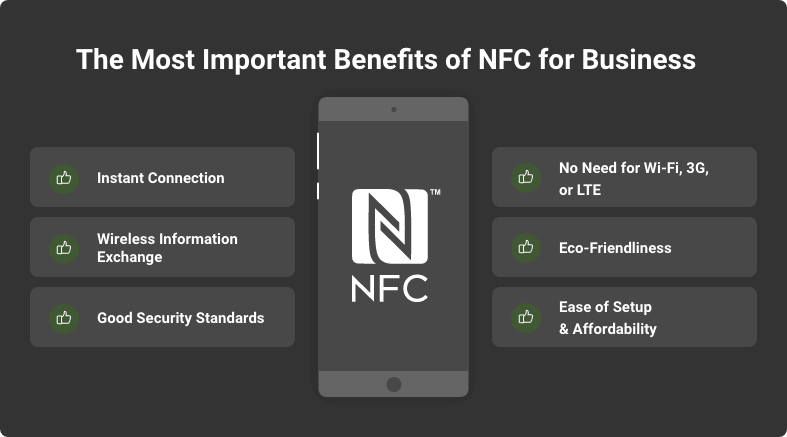 The closer two devices are to each other, the faster they connect. But even at a distance of 4 cm (the maximum permissible for the technology to work), the connection and data exchange occurs in a split second. Instant connectivity makes NFC extremely convenient for businesses and users. In addition, users love the fact that in order to connect with an NFC tag or sticker, they don't need anything other than a smartphone, which is always in their pocket or at hand.

In addition to the fact that connection and data exchange is instant, you don't need wires to connect your two NFC devices. An NFC tag or NFC sticker works wirelessly, just as the user's smartphone does not need anything other than the built-in NFC function and proximity to the second device to exchange data and commands to be successful.

Of course, no technology can be completely safe. Each of the innovations has its advantages and disadvantages. However, as for NFC, the former prevails over the latter when it comes to data transfer. NFC has a good level of security since data exchange occurs only in the immediate vicinity of two devices to each other. To intercept data, an attacker must also be as close as possible to both the user and the NFC devices. Also, the usage and development of NFC technologies are regulated by specialized documents.

According to research, “The NFC protocol needs standardization in order to be accepted by the industry for commercialization and provide for compatibility between the devices produced by different vendors. Standardization means keeping the specifications open and stable, and accessible for everyone, also facilitating the protocol analysis and device adaptation for various purposes. The standards are published by ECMA International and ETSI standards. The three standards ISO/IEC 14443 A, ISO/IEC 14443 B, and JIS X6319-4 are RFID standards which have been prompted by different companies (NXP, Infineon, and Sony).”

NFC technologies also work without Wi-Fi, 3G, or LTE. This is a significant advantage for users who still get the opportunity to exchange data, even if there is no Wi-Fi access point nearby or the 3G limit provided by the mobile operator has already been exhausted. So businesses don't have to invest extra in these technologies to make NFC work.

Thus, NFC technology is becoming versatile and applicable in various business sectors. For example, small shops using POS terminals with built-in NFC functionality aren’t required to deploy Wi-Fi in sales areas. Hotels and restaurants need not worry if users can use NFC in locations where the Wi-Fi signal may be weak.

NFC can be considered a reasonably green technology, making it a great choice for conscious companies that care about the planet’s health. The most obvious green advantage of NFC is its ability to replace plastic cards and paper.

This idea has already been implemented by Identiv, which creates NFC tags from a recyclable paper without the use of plastic and other harmful chemical components. However, even when using traditional NFC, they still last longer than any plastic media, plus the NFC sticker cannot be lost, and the NFC tag is quite difficult to damage.

Thus, NFC is becoming an excellent and affordable alternative to plastic in industries where it is traditionally used - for example, in banks, hotels, and companies that use plastic cards as an alternative to keys.

6. Ease of Setup and Affordability for Business

It's easy enough to set up NFC technology for your business purposes. It is enough to buy the necessary NFC tags or stickers, configure them (the seller can also provide this service), and/or develop an appropriate NFC application, such as in the case of smart parking, which we have already mentioned.

Thinking of integrating NFC into your business processes? We have already talked a little about the benefits of NFC technology, which means that we can move on to the practical side of the issue. Our team can help you create an NFC application for your business.

The Ways Different Businesses Use NFC

There are a lot of industries that may benefit from NFC technology usage, considering the above advantages. 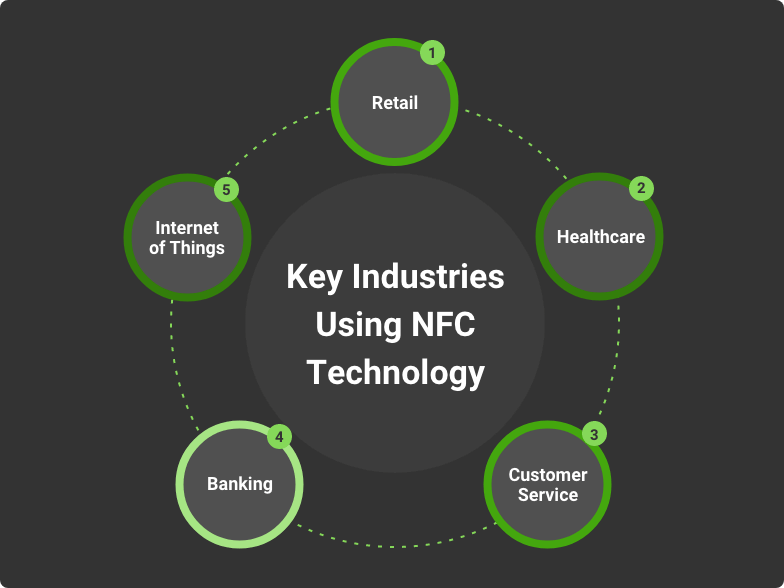 Examples of some industries using NSF technology for their own purposes

When it comes to retail, contactless payments are already an integral part of the shopping experience. However, NFC tags can also be used more creatively, not only as stickers on products and shelves. For example, you can use an NFC sticker to ask users for feedback or offer them a quick social media check-in while in your store in exchange for a discount.

The usage of NFC is quite promising for healthcare. As the simplest example, medication packages can be equipped with NFC stickers so that the doctor can quickly read this information using a smartphone and prescribe the best alternative to the patient. NFC tags can also contain instructions in case of an emergency.

As for customer service, this is the way NFC helps a business across industries. For example, a restaurant may embed an NFC tag for instant social media check-in. The same tag can be installed in a public park or at a bus stop for an instant and secure Wi-Fi connection. Print media may include NFC stickers containing information about promotions from other companies or discount opportunities. The list of available opportunities is almost endless.

As for banking, there are three ways NFC can be used. Primarily, thanks to the efforts of mobile developers, NFC is the technology behind contactless payments. Secondly, thanks to mobile banking development, NFC has become a worthy alternative to plastic bank cards, which can be lost or stolen and are quite difficult to recycle. Plus, NFC tags can serve as tools to control employees and their access to safe deposit boxes, cash vaults, and confidential information.

IoT devices are already inseparable from NFC, and in the future, the cooperation of these technologies will become even more promising. For example, NFC tags can be used as part of the smart home ecosystem. Each time a user wants to connect a new device to the system, it will be enough to use the NFC tag to automatically configure the device and automatically integrate it into the smart home.

Having NFC opens up many opportunities for already existing and newly launched businesses. Below are some of the NFC business ideas you may implement in 2021. 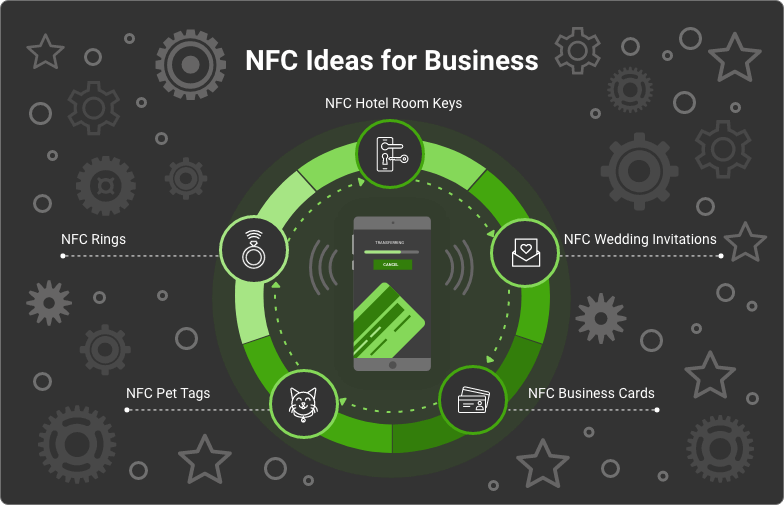 Here are some ideas for using NSF technology in business

NFC technology is quite universal, affordable, eco-friendly, and promising. There are many NFC ideas you may get started with and a lot of ways to use NFC to streamline some of your business processes. What’s more, the industry is expected to grow, so right now is a great time to start your project development.

Already appreciate the potential of NFC for your business? Or do you want to implement one of the ideas that we described above?

How to Build a Face Swap App Like MSQRD