Kubernetes vs. Docker: Comparison of Platforms

When creating applications with a great potential for future growth, you might think about automating future scaling and management processes. Reliable resource management and cross-platform service availability are essential for the project’s success. Container orchestration platforms help setup sufficient microservices infrastructure and streamline the development process.

There are two leading solutions on the market - Kubernetes and Docker Swarm. Both have their peculiarities and limitations. The question is which solution works best for your specific project. Review this up-to-date comparison of Docker Swarm vs Kubernetes in 2021, and you’ll be able to choose the right tool for your tech stack.

A Few Words About Container Orchestration

The containerization technology, Docker, allows running applications in separate independent environments called containers. It is like a typical virtual machine with total infrastructure isolation and much lower resource consumption. Containers help streamline the app deployment, isolate them from each other, and speed up the development process. However, when there are too many containers, they become hardly manageable. An orchestration system is required to solve container management issues.

It is possible to go without orchestration. However, in this case, your project will lack flexibility and scalability. There will be security issues, as the processes not separated into containers may affect each other. It is much more reasonable to create systems with multiple containers where each one runs a specific process, and all they communicate through network ports and common catalogs.

Multiple container orchestration platforms help deploy the container system and build a single centralized console for container management. To name a few, these are Kubernetes, Docker Swarm, Apache Mesos, Fleet, Aurora, Nomade, Microsoft Azure Container Service, etc. Let’s focus on the Kubernetes vs. Docker comparison, as these are the two most popular solutions from this niche. 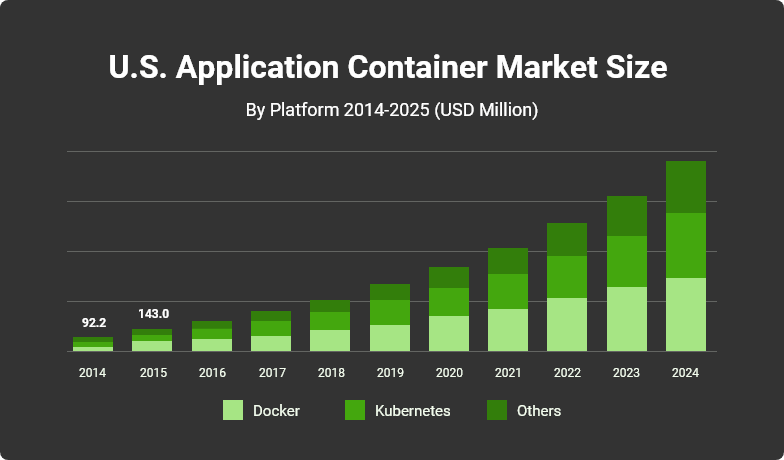 When considering non-production environments for development or testing, experts prefer Docker Swarm, which is much easier to master than Kubernetes. Before comparing Kubernetes with Docker Swarm, let’s make a short overview of both platforms.

What is a Kubernetes?

Kubernetes was developed by Google in 2014 and became the most popular tool for orchestrating containerized workloads in cloud environments. The Cloud Native Computing Foundation (CNCF) has managed this open-source solution since 2015.

Kubernetes features a decentralized architecture that works on a declarative model. The basic scheme of Kubernetes operation looks like this: 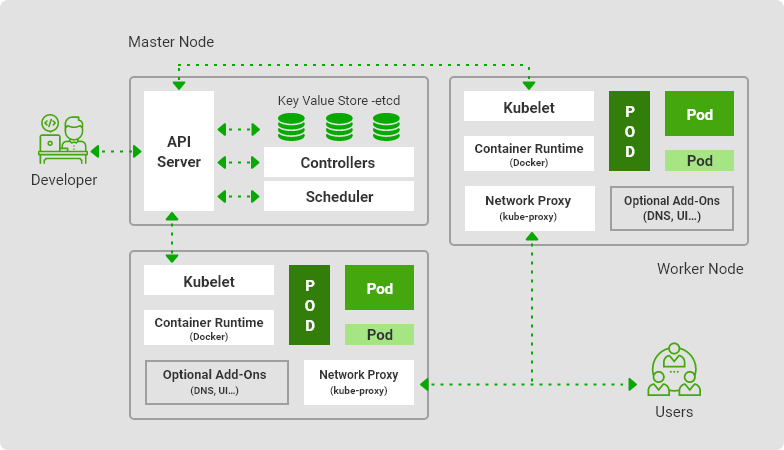 A Master Node distributes instructions to worker nodes, getting commands from the CLI or UI. Commands define pots, replication sets, and services to maintain by Kubernetes. You also set up the desired state parameters for each app in a cluster.

The API server is the only element in the control plane that developers directly interact with. All internal and external components communicate via the same API. The Key-Value Store (etcd) is a database used to backup all cluster data and configuration. A controller is responsible for obtaining the desired state from the API server and defining if the current nodes’ states differ from the desired ones. If any differences are found, a controller resolves them. A Scheduler monitors requests from the API server and assigns them to suitable nodes. If no eligible nodes are available at the moment, the queries are set to pending until an appropriate node appears.

The API server assigns new tasks to worker nodes. After the task is executed, a worker reports the results to the Master. 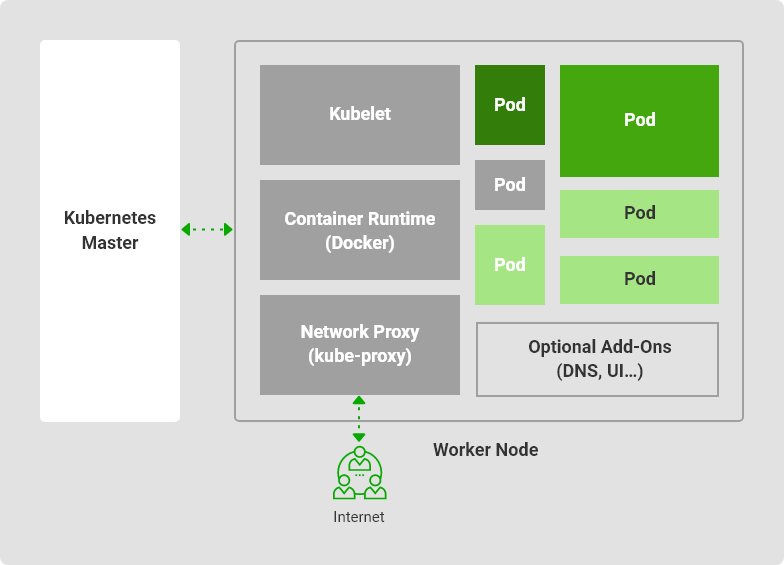 The kubelet in the node watches for tasks from the API, executes them, and sends reports about the work done to the Master node. It also monitors the pods’ state and reports to the control panel if there are functionality issues. After analyzing the kubelet’s reports, the Master node decides how to allocate tasks and resources to maintain the desired state.

The container runtime starts and stops containers and pulls images from the container image registry. Usually, this role is executed by a third party solution like Docker. The kube-proxy assigns an IP address to each node, rules the traffic load-balancing and routing.

A pod is the smallest item in the Kubernetes scheduling. The application is scaled by adding or deleting pods. The pod wraps a container with the app code. The Master schedules the pod on a specific node based on the resource availability. It then coordinates with the container runtime to launch the container. If the pod fails to execute its tasks, Kubernetes starts a new pod instead of fixing the existing one.

Kubernetes is a universal solution for creating distributed systems. It is a complex tool with lots of features, and it is rather challenging in configuration and management. However, deploying Kubernetes as a service on the cloud streamlines its setup and usage.

What is a Docker Swarm?

Docker Swarm is the native Docker tool for scheduling Docker containers. It is used for setting and managing clusters of Docker nodes in a single virtual infrastructure. A Docker container is a lightweight package with various dependencies needed to run a specific application. The dependencies include code, libraries, frameworks, etc. Using Docker Swarm, you can make multiple nodes of the same cluster share containers and have numerous Docker images running on the same host OS.

Each Docker Swarm node is a Docker daemon, and all daemons interact with each other through the Docker API. 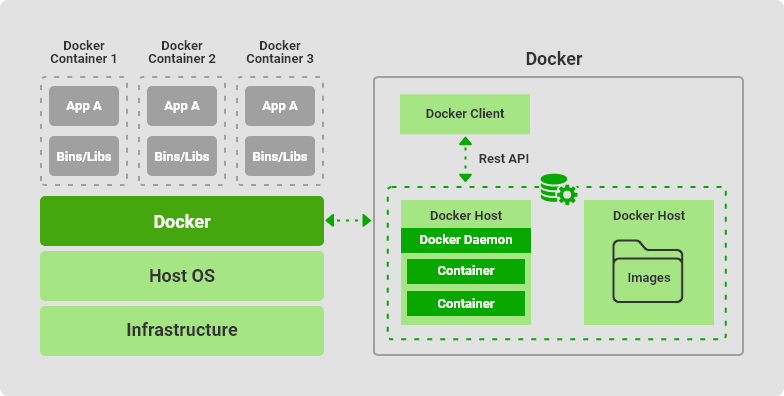 Analyzing the Docker Swarm architecture on a higher level, you can notice similarities to Kubernetes. There are two primary components: 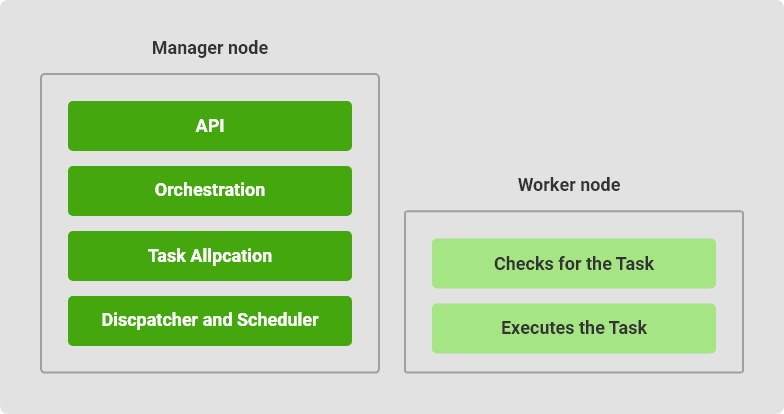 The object-level elements of the Docker Swarm include:

Docker Swarm is a built-in clusterization tool working “out of the box.” It is much simpler in setup and usage. However, it is not as flexible as Kubernetes.

While both solutions are used for the same purpose, there are critical differences in how they operate. Both help automate the microservices management across multiple clusters and scale the applications effectively. Analyzing the major differences between Docker and Kubernetes makes it much easier to choose the right tool for your project scope.

Kubernetes: Requires fully manual installation with a thorough planning process to get it up and running. There are different installation processes for various OSs and providers. You should define each cluster configuration in advance, like setting IP addresses and assigning roles for each node.

DockerSwarm: Compared to Kubernetes, it offers a much simpler installation. It is also flexible in adding new nodes to an existing cluster, both worker and manager. You will need to master only one set of tools to build Swarm-based configurations and environments.

Kubernetes: An application is deployed using a combination of deployments, services/ microservices, and nodes.

Docker Swarm: Applications are deployed as services/microservices in a Swarm cluster or using Docker Compose. Multi containers are defined using a YAML file.

Kubernetes: Defining and deploying clusters is performed via Kubernetes’ YAML format and APIs that are not compatible with the Docker API and Docker Compose.

Docker Swarm: Docker Swarm API is limited in functionality, lacking some features compared to the Kubernetes. However, it is familiar to any Docker user.

Kubernetes: It features a few monitoring and logging versions for the services deployed within the cluster. These are Elasticsearch/Kibana for logging, Heapster/Grafana/Influx for monitoring.

Kubernetes: Kubernetes is a complex all-in-one platform with reliable guarantees for the cluster state and a unified set of APIs. It is a perfect solution for distributed systems. However, it is more challenging to manage scaling behavior with Kubernetes.

Docker Swarm: It provides much faster and easier container deployment and scaling on demand.

Kubernetes: It features a flat network model, in which all pods can communicate with each other. The network policies define the interaction between pods. The network itself is usually set up as an overlay with two CIDRs for the pods and the services.

Docker Swarm: Each node in a Swarm cluster generates an overlay network for services available to the entire cluster. To communicate between containers, it also generates a host-only bridge network. There is also an option to encrypt the user traffic by customizing the overlay network.

Docker Swarm: Distribution of the incoming requests to service names is performed via DNS. Swarm can assign addresses to services automatically, as well as manually assign specific ports for each service.

Kubernetes: Administrators and developers can monitor and manage cluster status via the web user interface.

Docker Swarm: there is no built-in visual dashboard. GUI is available via third-party solutions.

Here is a Docker vs. Kubernetes comparison table to summarize the main differences between the two platforms:

Regardless of existing differences, both frameworks are powerful enough for intelligent container orchestration. Should you go with the native Docker solution or spend more effort to run Kubernetes on top of the Docker? There are a few points to consider for the right choice.

Which Platform Should I Choose?

Primarily the choice of the platform depends on your business goals. Docker Swarm works great if you do not have very complex requirements for the project configuration and aim for a quick setup. The key advantages of this platform are its simplicity and sharp learning curve. It is excellent for application development and testing needs. Alongside comparatively simple deployment and automated setup, it also requires fewer hardware resources compared to Kubernetes. If your project requirements fit into the functionality of the Docker API and have no strict demands in detailed monitoring, there is no need to spend more effort deploying Kubernetes. Docker Swarm is suitable for users struggling to get the containerized application up and running quickly.

On the other hand, Kubernetes is a recognized market leader among container orchestration solutions, and not without reason. If you need to develop a complex application with thousands of containers, go for Kubernetes. It offers powerful benefits for scaling, advanced secure and fault-tolerance. The major drawback for developers is a steep learning curve, challenging configuration, and setup processes. But it gives better control under the project and offers broader functionality compared to Docker Swarm. It would be the best choice for projects that require advanced customizing options and more functionalities than Docker Swarm can provide.

When choosing the right toolset for your project, always consider the result-effort ratio to make the right decision. If a lightweight tool can satisfy your needs, there is no sense in using a more complex solution, even if it features broader functionality. Unless there are specific requirements only covered by Kubernetes, we recommend going with the Docker Swarm.  It provides simplicity, smooth integration with Docker, and comprehensive automation capabilities. If you still doubt which orchestration framework, Kubernetes or Docker Swarm, fits you better, consult professional DevOps experts. Our specialists will help you decide by analyzing your application specs and plans for scaling and weighing technical aspects of software administration.

Would you like to create a powerful, scalable application with an effective, fault-tolerant orchestration system? We are happy to help!